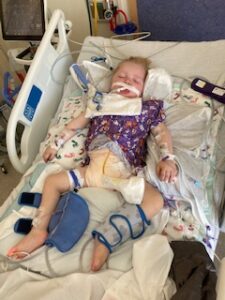 Things had been going relatively well since our trip to Boston. We appeared to have a handle on Cam’s anemia situation (just transfuse every month, no problem!), he had a sleep study that gave us some new settings to work with on his machine, we went to a naturopathic physician who recommended some new supplements, we starting changing his formula to a more real-food slush, we went to Hawaii and he LOVED it (I’ll tell you all about that another time), he started second grade, we seemed to have a somewhat better hold on the pneumonia (with some very aggressive airway clearance maneuvers), and things were chugging along.

And then – I don’t know if he just missed his PICU friends, or he just wanted to remind Mom and Dad who’s in charge – but Cameron came up with a whole new set of scary things. He’d had bloody noses before, but this one he got two Fridays ago just wouldn’t stop. Kris and Karen took Cam to the emergency department (I was at work) and by the time I got there, they had determined Cam’s platelets were 18,000! Just in case you don’t know, normal platelets are 150,000 to 500,000 and spontaneous bleeding starts usually at 30,000 and below. So, 18,000…not good. They gave him a platelet transfusion, packed his little nostrils with some kind of absorbable mesh junk and moved him to the PICU.

Sigh. I really didn’t miss the hard beds and the bad coffee, but the PICU somehow feels like a second home.

That should have been the end of it. But no, Cam had other ideas. 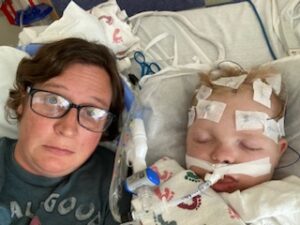 We had the standard day or two of struggling with his breathing, treating for aspiration of all that blood from his nose, wavering between intubating and not intubating, generally freaking out about his lungs like we always do until he started to settle down Monday morning.

But his eyes looked weird to me. By the afternoon, he was having seizures. They got a CT of his brain which showed a smallish brain bleed (thanks a lot, stupid platelets!) and enlarged ventricles (his shunt, which is supposed to drain off the extra fluid in his brain, wasn’t working). So dang it, they had to intubate. He needed to be on a few IV medications to stop the seizures, which would suppress his breathing, so the ventilator would breathe for him while his stupid brain settled down. Grrrrr.

There followed a couple days of EEG (monitoring brain waves for seizures), anti-convulsant medications, CT’s, MRI’s, and ultrasounds, until he went in for surgery Friday. The neurosurgeon found a section of his shunt that was partially obstructed, but not with blood cells as I would have expected. The neurosurgeon thought it was cells of the choroid and ependyma, which are the parts of the brain that make the cerebrospinal fluid (you really wanted an anatomy lesson, right?) so we’re still not really sure how the bleeding/low platelet fiasco was related to that. Anyway, she fixed it. And Cam got some more platelets. Again.

Saturday, he slept. And slept.

Same thing Sunday. And Monday. He was off the sedation, so we were starting to get a little worried. EEG said no more seizures. MRI showed ventricles getting a little more back to normal. I started to worry he wouldn’t wake up at all. What if something was more damaged in there than we thought? 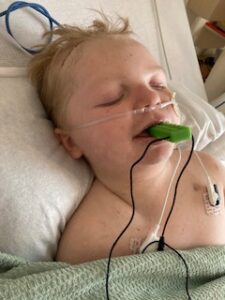 Over the next couple days, he slowly started waking up a little. They extubated with a minimum of drama, and though his sodium and fluid balance was all jacked up, he was making progress. Finally, Friday, we got to go home. They were pretty hesitant to let him go, since his sodium was all a mess, but we knew from experience he always does better at home. Today he is SO weak and SO tired, but he seems comfortable. He’s even smiling now and then! His sodium still isn’t quite normal, but its trending in the right direction, I got most of the EEG glue out of his hair, and his bruises are healing quickly. He’s on seizure medication for a few days, but hopefully he’ll back back to his usual special self very soon.

This one was scary, you guys. There was at least a couple days when I thought we might not get to take him home this time. We’re pretty used to the respiratory and the blood issues, but the re-introduction of the seizures and neurologic complications was a new level of alarming. The last time he had seizures, way back in 2017, Kris and I had to decide to surgically remove half of his brain. I did NOT want to feel that kind of heart-sinking dread again. 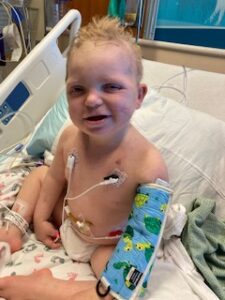 So even though it sucked, and we basically had to check out of our lives for a couple weeks, Cameron made it through some extremely dangerous medical challenges with his usual flare and style. And I got to watch both seasons of Russian Doll and learned how to play Old McDonald Had a Farm on the ukulele, so it wasn’t all bad. We’re home, together, and thankful we all get to live another day! And once again, thanks to all of you for your unending support and love!