Cam Update: Back from Boston 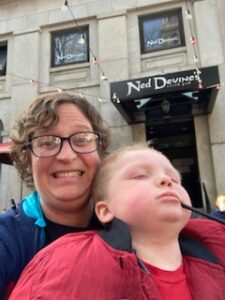 We love Boston. After our family spent a couple months there in 2016 when Cam had his radiation treatments, it’s always felt a little bit like a home away from home.

Once again, we stayed at Christopher’s Haven, across the street from Massachusetts General Hospital and Beacon Hill. We got to hang with the brave children and their families, so similar to ours it’s hard not to bond with them immediately. You should have seen Cam smile while he played with those kids! I was ESPECIALLY cheesed I got to spend time with one of my ABSOLUTE favorite people, Catie (CH manager extraordinaire), whose enormous heart is only matched by her boundless energy, endless optimism and the most amazing tattoos you have ever seen. Kris and I can’t say enough about Christopher’s Haven. Seriously, give them all your money. 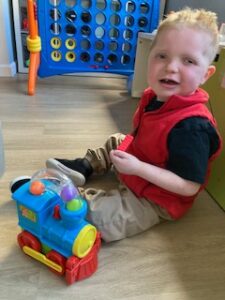 I know you want to know how Cam’s medical appointments went, but first I want to give some shout outs from our trip: 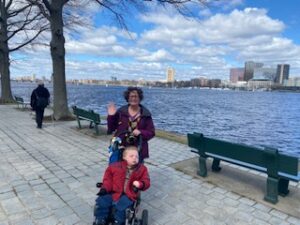 So now for the medical update (I mean, this wasn’t a vacation, right?).

Cam had eleven appointments (though some of them schmooed into the next one), plus x-rays and blood tests, over the course of five days. He was supposed to have a triple scope (take a camera into his GI tract and airway), but they canceled it the day before, thinking intubating his super swollen larynx would be a ticket to the Boston PICU for a week. No matter, we got plenty of information to bring home to Colorado: 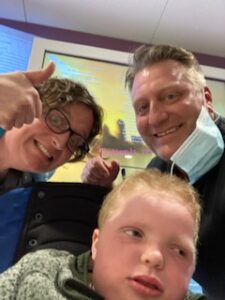 We have been home about a week, and it took about that long to get past the jet lag and get unpacked, but Cam is doing pretty good. He seems sleepy, and last weekend he thought it would be fun to poop blood for a couple days (we determined he was swallowing blood after a cut lip and lost tooth, which was super weird but not outside of the realm of messed-up crap he does on the regular, and in any case has stopped now), so now we’re back to what’s left of our routine and getting Cam plugged back in with his local doctors.

The plan for Cameron now? Avoid pneumonia, sleep at night, get stronger during the day, get back on track. Simple, right?

5 thoughts on “Cam Update: Back from Boston”