Back Home (and in one piece!) 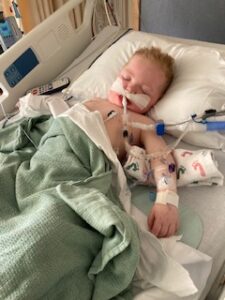 Well, we made it home! Yay!

Since we last talked, Cam was extubated successfully, and proceeded to recover like a rock star in the days following. We got home Sunday night and had a week or so to acclimate to the real world again. Though most of this monotonous hospital stay was spent by Cam laying there, oblivious to Shrek on constant replay, me trying to find a working coffee machine and remembering to wear a bra to rounds, and Kris trading me out every other day so I could see my teenagers and pretend to be human, we did have a few noteworthy adventures:

So now we are home, keeping Cam out of school so he can recover (he can almost sit up on his own again!) and to give him rather intense breathing treatments every four hours (okay, he did venture out for Brady’s performance as the Wicked Witch of the West and for Carson’s soccer game tomorrow…he’s still gotta live, right?). And he lost another tooth! Doesn’t he look dashing?

Next Friday, we are taking him to Boston Children’s Hospital for a second opinion from all the departments we could reach. I’m quite sure it’ll be an interesting week and I’ll have some stories to tell you, if I’m not too tired and don’t lose my charging cord (and my sanity) in Boston. Thanks for reading and wish Cammy luck!