And I haven’t been fair to you.

A few months ago, I stopped updating Cameron’s Caring Bridge blog. I let all the people who have been following him, who care about him, pray for him and love him know that I was taking it down and that if they wanted to follow him, they could check out this very website, Cams High Five. And then I ghosted them.

I haven’t posted in months. I haven’t updated anyone, I’m barely present on Facebook and when people ask me how he’s doing IRL, I tend to say, “fine”. 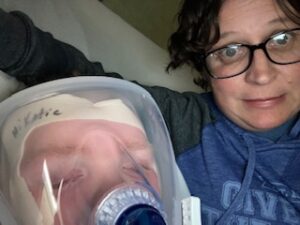 And that’s not fair to you. You who are reading this, who purposely signed on to get these posts because you love my little boy…I did you a disservice. And I’m sorry. Yes, Cam is mine, but he’s yours, too. From the very beginning of this journey (Isn’t that a nice word for it? Like we’re hobbits or something?), from the very first mention of brain tumor, our friends and family, acquaintances, clients and strangers, have been on board. You’ve sent cards, toys and stuffed animals, brought by food, took care of his big brother and sister, hosted fundraisers, donated THOUSANDS of dollars to various pediatric cancer charities and so many more things that I can’t mention or I’d break the internet. He touched your heart. I can see that. 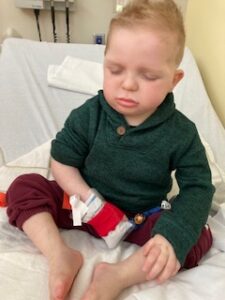 And still, I kept him from you. I sugar-coated and avoided – call it an over-developed sense of optimism and self- preservation – and I’m sorry. Sometimes, his situation is so hard for me that I sit on the bathroom floor and cry. Or I sing stupid songs really loud in the car (You want to know the best/worst one? “Like I’m Gonna Lose You” by Meghan Trainor. Check it out, I just ruined it for you! Now you’ll think of Cam every time you hear it.)

Today I was talking to Cam’s big brother, Carson, who is now fifteen. When the ambulance was at our house Friday night, Carson disappeared downstairs. I was trying to keep my shit together and not tell the firefighters and EMS team stupid things so I barely noticed that Carson had left, but today I was trying to pry from him the reason why. He claimed he was trying to stay out of the way, but I recognized the truth: he was scared. If he ignored Cam’s illness – if he avoided facing it – it wasn’t happening. Like the impressively well-adjusted mother I am (Ha!!!), I explained to him that wasn’t a healthy way to handle the situation. We need to talk about it. We need to confront it. Process it. Take care of each other and let others support us as well. We have to help each other, and that includes not hiding in the basement when firefighters are tromping through your house. For frick’s sake, help me remember to pack underwear!

Carson’s a smart kid. He got it. We’re a family. We have to stick together. Nobody gets through trauma alone.

It’s time for me to take my own advice. Not about underwear (though that’s important, too!) but about opening up to others who care.

You, who have signed on to know about Cam, deserve to know what’s happening with him and I need to stop avoiding. The internet is a public place, and honestly, it scares me a little (a lot!), but you who are reading this only signed up because you love Cameron. So I trust you. 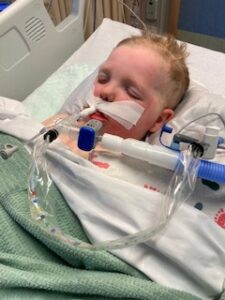 Here’s the short version of where we are now. Cameron has had pneumonia and pancytopenia (when the red blood cells, white blood cells and platelets are too low) off and on for around the last eight months. Since last July, he’s been in the emergency room more times than I can count, has spent maybe twenty (thirty?) days in the pediatric intensive care unit (PICU), about ten of those (so far) intubated on a ventilator, taken three ambulance rides and has been on crap-loads of steroids, antibiotics, inhalers and nebulizing treatments, had dozens of x-rays, MRI’s, blood transfusions and scopes, and been poked with about a bazillion needles. No, he’s never caught COVID (he’s good and vaccinated, thank you very much, and the people around him are very protective), but they did culture pseudomonas in his lungs last month. All of this appears to be a result of his brain tumor, losing tone in his upper airway and aspirating into his lower airway, though we are still trying to rule out very unlikely things like cystic fibrosis and immune system disorders. The last few weeks, it takes just about nothing to send him into an episode where he can’t breathe, he fights and cries, lays on the floor and scares the shit out of everyone in the room.

As I write this, we are in the PICU, intubated and on the ventilator. He is finally comfortable, with a machine helping him breathe, his IV full of sedating drugs. His little pink chubby face is peaceful (he got a blood transfusion last night), his arms splayed out like he’s flying, a pillow under his butt, a catheter in his bladder. I’m very sad (what a stupid, puny word, but I’m too sad to think of a better one), because I don’t know what’s going to happen. I know that Kris and I, and his brother and sister, and the people who do know where he is right now, aren’t going to stop fighting for him. But I also know there is a limit to science and to what the human brain and technology can do.

I don’t know who’s reading this, but I know if you are, you know Cameron and care about him. Thank you for that. It just may save all of us.

And thanks for reading. It feels good to be back.

30 thoughts on “An Update LONG Overdue”