At four years old, with multiple disabilities and medical issues, Cam made his first international trip. For two weeks Cam and the rest of us saw and did everything we could in Edinburgh, the Scottish Highlands and London. It wasn’t easy, hauling this kid across the pond with his wheelchair (and sometimes carrier), but totally worth it. I hope the information and stories I post here will help someone else plan a special trip!

(Please double check with all locations for updates, especially since COVID!)

This little gem is not well-advertised, but it is definitely worth your time, especially if you are interested in anything medical, historical and/or macabre. Owned by the Royal College of Surgeons of Edinburgh, founded in 1505, it has grown steadily since then and now includes one of the largest and oldest collections of surgical pathology (pathology basically means the study of messed-up body parts), the History of Surgery and a dental collection. It will take you many hours to see all the artifacts, tissue specimens and artwork and to read all the stories of individual patients and doctors and how they contributed to today’s medical advances. We went searching for Cam’s kind of brain tumor and found it! There’s a book made out of the skin of a grave robber (you’ll learn all about Burke and Hare if you spend more than five minutes in Edinburgh), read about the surgeon who inspired Sherlock Holmes and see actual instruments used in surgery before anesthestics and hand-washing. It may not be suitable for small children (I think it must have been Cam’s nap time), but the rest of us loved it. I wanted to stay longer. But then again, crazy surgery and medical stuff is my bag.

The best part about The Surgeon’s Hall Museums is they are completely wheelchair accessible. Although they are in a really old building, there’s a lift (elevator) that goes to all floors and wheelchair accessible restrooms in the basement. There’s one little spot in the pathology section that may be too narrow for wider wheelchairs, but you’ll have enough to look at, I doubt you’ll mind much.

Okay, despite the fact that the name is not very creative, this place was bananas awesome! We spent all day there and still couldn’t see everything. All about Scotland, from earliest history to future technology, there’s something for everyone here. Wildlife and fashion, space travel and ancient civilizations. Do you remember Dolly the cloned sheep? She’s here!

There’s a big exhibit of stuff that belonged to Mary Queen of Scots and a giant set of musical pipes that Cam thought was hilarious. You can stop for tea and a scone at the little cafe and watch all the people wander through the great hall. My personal favorite at the National Museum of Scotland? I learned a veterinarian invented the bike tire. And his name was Dunlop. Yep, the awesomeness is beyond measure.

The accessibility here was so amazing. All floors are accessible by lift, there is tons of seating and you can borrow a wheelchair for no charge. There are accessible restrooms on most floors and even a Changing Places restroom, which I just LOVE! Not to get all judgy, USA, but we need to step it up.

Since Edinburgh was founded in the twelfth century, a lot of people have died. As many of them had religious beliefs that included burial on hallowed ground, and Edinburgh was a walled-in, populous city for centuries, there are a LOT of graveyards. For fun, google “Edinburgh Graveyards” and see the big ole list that pops up. The graveyards are all named after the churches they are beside.

On our walkabouts through town, when we came across an open graveyard, we’d cruise on through, just to see the sadness and beauty of it all. Our two favorites were Canongate, which was a couple doors down from our flat, and Greyfriars, which was just really, really cool. We visited both of them several times, wandering the trails, reading the names, years and descriptions on the gravestones.

Canongate Kirk (kirk means church) was near the bottom of the Royal Mile, not far from the Queen’s Palace of Holyroodhouse, making it fairly significant, historically. We never did go in the church, because it is still an operational place of worship that the Queen and her family still occasionally attend, but we happened across a wedding party out front once. Wow, were those kilts something to behold! The graveyard itself is final resting place of David Rizzo, Mary Queen of Scot’s murdered bff, and the poet Robert Fergusson. When you are walking (or wheeling) through it, you can just feel the weight of centuries. I half expected a ghost to step out from behind a gravestone and ask me for a dram.

Greyfriars Kirk and graveyard is of course one of the most famous in Edinburgh, home of the loyal terrier that stayed at his master’s grave for fourteen years and inspiration for many of the character names in the Harry Potter books. It was home to dozens of ghosts and poltergeists and of major historical significance, making it one of the most popular sites for ghost tours (more on that later). We did go in the actual Greyfriars Church, as it is wheelchair accessible if you can manage the cobblestones that are everywhere, but the graveyard was ten degrees of fantastic. Row after row of worn, ancient gravestones, mortsafes, haunted mausoleums and even a prison.

Wheelchair accessibility is largely weather dependent, as muddy trails make it hard for wheels to move freely, and sometimes you have to go around the long way to avoid stairs. If you have good off-road wheels, or wait for a dry day, the graveyards are definitely worth the effort.

I actually took the silver tour three times. Don’t judge me. It starts with a narrated Disneyland-style ride that describes how Scotch Whisky is made (by the way, it’s just “whisky” with no “e” while in Scotland), followed by a lesson on the various origins and flavors of whisky (including samples), and a tour through the world’s largest collection of rare Scotch Whisky. It ends in a cozy pub where you can chill with your new-found class and culture. Swirl. Sniff. Oh yes, you, my friend, have found your people. Oh, and there’s a gift shop, where you drop many pounds (I mean pounds sterling, the Scottish money).

Kris and I were pleasantly surprised at how accessible the ride and tour was for both the big kids and Cameron in his wheelchair. They gave Brady and Carson an Irn-bru (a Scottish soda pop that tastes a lot like cream soda but it’s orange) instead of whisky samples. And Cameron’s wheelchair didn’t even make them blink. They had a special car for him on the ride, accessible restrooms and lifts to all parts of the tour. Apparently they have won some awards for their accessibility, with details on their website. Even if you’re not a big drinker, just go, you won’t regret it. 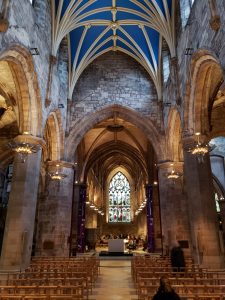 With it’s striking, imposing architecture, right there in the middle of the Royal Mile, you can’t miss Saint Giles Cathedral, the site of so much of the history of Scotland. If pressed, I would say that although not all of St. Giles is wheelchair accessible, the best part is. There is a side chapel and a cafe that are not accessible, but it is easy to wheel on in and take a look around the main building. It is no charge to visit (but come on, people, donate!) and the stained glass art alone is worth it. The day we were there, someone was playing the organ, and as we milled around, taking in the heavy pews, arches and columns, detailed wood and stonework and the exquisite windows, I could almost forget what century we were in. Under normal circumstances, you can come to church services, listen to concerts or take a rooftop tour. With hundreds of years of history behind this spiritual, magical building, it’s worth a drop-in.

I will admit, I’m an Old Town girl. I’m a BIG sucker for the centuries-old sandstone buildings, darkened by time and history, the legends of witches and royalty, secret vaults beneath the streets and clever robbers and writers plotting behind drams of whisky. The place REEKS of magic. As close as I’ve ever been in real life thus far.

But New Town was really cool, too, and I wish we would have had more time. It’s kinda funny to an American like me, but the adjective “new” in New Town refers to how it was built in the late 17th century, not the 12th, like Old Town. New Town is directly north of Old Town, just across the train tracks and the Princes Street Gardens (previously known as Nor Loch, or the poop lake where they used to drown witches…I’m serious). Whereas Old Town is dark and mysterious, New Town is peppy and clean. Whereas Old Town is dangerously stacked tenements, New Town is all square blocks and manicured gardens. Don’t get me wrong, New Town is still very historic, just with a fresher, pre-Victorian flavor. Today, New Town is the part of Edinburgh with all the modern shopping and restaurants, the site of multiple worthwhile museums and monuments, amazing restaurants, pubs and clubs and it’s imminently more wheelchair accessible (and flatter!). It’s also the site of the Balmoral Hotel, where JK Rowling finished writing Harry Potter.

We did not spend enough time in New Town, or in the adorable villages nearby. Basically, we just started walking, with only a vague idea of where we were going, and ended up wandering through Dean’s Village, then Charlotte Square, up George Street to St. Andrew Square. We didn’t actually go in many places, mostly because we were all grouchy and hungry and couldn’t agree on anything, but I regret that now. I suspect next time we go to Edinburgh, when Cameron is too heavy to carry, we will spend more time in New Town. My advice is don’t write it off, do your homework to find accessible places to go. Some places we missed that I promise we’ll hit next time: The Royal Botanic Gardens, The Royal Yacht Britannia (in Leith, which we also missed) and the Scottish National Gallery.

Although Scotland was a challenging first international trip for Cam and our family, it was AWESOME! I really look forward to going back when I have Cam’s wheelchair and medical routine better established. Please, if you go to Scotland, or Edinburgh or London, and you have gone somewhere amazing that we missed, drop us a note! Photos are even better! Here are some of my posts to help you in your travels: (LINKS TO COME)

Cam Goes on a Tour of the Scottish Highlands

Cam Rents a Flat in Edinbugh

Getting Around Edinburgh, Scotland, with a Disabled Kid

What to Eat in Edinburgh, Scotland