My perfectly healthy ten-month-old son had been absolutely not right for a week. His symptoms were nothing very specific — no vomiting, coughing or fever — nothing to make anyone think he was a ticking time bomb. He had been sleepy and grumpy and had a strange reluctance to use his right hand, but several visits to the pediatrician that week had produced no real diagnosis or improvement. Instead, he was slowly getting worse.

January 30, 2016, we decided Cameron’s subtle signs were in fact an emergency, at least to us. After our trip to Children’s Hospital Emergency Department that Saturday morning, nothing would ever be the same again. 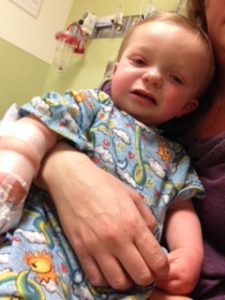 It was our first visit to Children’s, having been blessed with two super healthy and not particularly accident-prone kids up until that point, so I was unprepared for the cuteness of the place. Kris checked us in, talked to the security guard, gave an ID and an insurance card to the front desk woman, while Cameron and I explored the waiting area. It was expansive and bright, with colorful, squishy furniture and desks, as if Willy Wonka was the interior decorator. There was a playground right outside the picture window, though it was dull and cold in the winter.

The triage nurse seemed unimpressed by our story, though the treatment nurse arrived quicker than I would have expected and escorted us to a private exam room. She was a smiley blonde, with pink scrub bottoms, who cooed and tickled Cam as she took his vitals and our history. She bounced away and we waited.

Cam sat on my lap and alternated between fussing and sleeping. I switched through the Disney movies they had on demand and Kris scrolled through Facebook on his phone.

And we waited, worried but not particularly alarmed.

I began to wonder where an adult-sized toilet might be when finally, there was a polite knock on the door. “Um, come in?” I called, looking sideways at Kris.

He shrugged, then smiled as a white-coat came in. Our emergency resident was a twelve-year-old boy with floppy hair named Dr. Steve. He introduced himself and took very thorough and studious notes on Cam’s history. He was polite and unsmiling, but at least he didn’t interrupt. Then, he examined Cam, who had started whining again.

I asked Dr. Steve, “Do you see anisocoria?” That means one pupil is a different size from the other, often an indication of neurologic dysfunction. Dr. Steve hesitated and I suspected he wondered whether I had Googled that fancy doctor word or what. 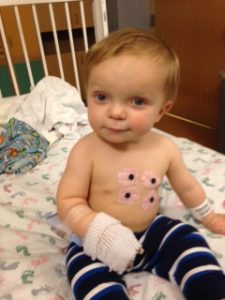 “No.” He stood Cam up to test his leg strength. “Normal.” He bent Cam’s arms and legs, felt his elbows, shoulders and wrists. Finally, Dr. Steve handed Cam back and he settled into my arms and tucked his head under my chin. “I think we should start with blood work, to rule out metabolic problems.“

I thought about a liver shunt causing hepatic encephalopathy or diabetes mellitus causing weakness and peripheral neuropathy and agreed. That’s where I’d start if Cam were a dog. “So what do you think is wrong?”

“We ruled that out last week. Three sets of x-rays.”

He just nodded, then thought a moment before answering. “My next thought is that this is a virus. I’ve seen it make babies act like this before.”

I wanted to say, ‘Something’s wrong with his brain,’ but I said nothing. At this point, I was still hesitant to challenge another doctor.

“If Cam was older, and I didn’t know better, I’d think he was on drugs,” Kris piped up. I smiled at him. We were partners in whatever was happening, whatever was about to happen.

Dr. Steve nodded again, but didn’t answer. I wondered if he was even listening.

“Would it be appropriate to get an MRI, to rule out something neurologic?” I finally asked, frustrated at the shaking in my voice.

“I don’t think Cameron’s signs warrant that, but I’ll check with the boss.”

Ironically, I was reassured. There was a boss — his attending physician — one last person who may just agree with me. I had another overeducated question for Dr. Steve. “Maybe also a clotting profile, to rule out a clotting disorder?” 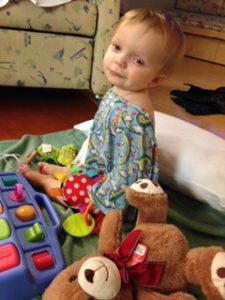 My face felt warm. “To rule out an ischemic event?”

He looked down, hiding a smirk. “Again, I don’t think a stroke fits with the signs but I’ll check with the boss.” Then he walked out. The door latched closed and I could feel my heart thumping in my chest. Something didn’t feel right.

Kris and I waited again while Cam squirmed and fussed. The attending emergency doctor came in. Dr. Schmidt, with the long dark ponytail and intense eye contact. She asked us questions and examined Cam, stopping for a long time to inspect his face. “See that cheek muscle? It’s more tight on this side than this one, and his smile is a little crooked,” she said, not looking up.

“Uh-huh,” the doctor nodded knowingly. Then she grew very intent as she turned to Kris and me. “The symptoms you are describing — and that I’m seeing — are very concerning. I’d like to get some imaging. An MRI or a CT.”

“Finally!” I yelled, a bit too exuberantly. Cam jerked and then settled. I took a deep breath before speaking again and was proud of my reasonable tone. “Thank you. That’s all I wanted. I think I’ll go crazy if I don’t get a negative MRI.”

Dr. Schmidt smiled, but it didn’t reach her eyes, and she left to put orders into the system.

The bouncy blonde nurse and a man in a Captain America T-shirt came in next to place an intravenous catheter. They tried Cam’s left hand first, but he was too strong and pulled it out almost immediately. They got the second catheter in right away, taped and secured. I changed Cam’s diaper and dressed him in an over-sized rainbow and bears hospital gown. Then we waited.

The CT itself didn’t take long. The machine was right down the hall. Kris and I carried him into the bleak white room, lay him on the table, placed his head in a tiny brace. I wore a lead apron and stayed near him, flashing a fun light-up toy to distract him. Twenty seconds and he was done.

Then back to the exam room to — you guessed it — wait some more. 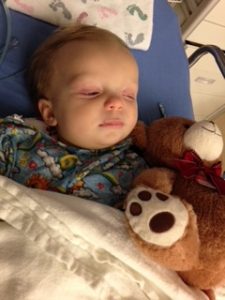 Twenty minutes later, we heard footsteps and two voices on the other side of the door.

“Are you ready for this?” Though it was muffled, I recognized the woman’s voice as belonging to Dr. Schmidt, the attending emergency doctor.

“I think so.” That was the resident. Dr. Steve. I could hear the hesitation in his voice, even from inside the exam room.

With a growing sense of unease, I glanced at Kris, who was casually dropping his phone back in his pocket. He hadn’t caught the tone of the two doctors. Or maybe he wouldn’t have recognized it anyway, since we had not yet crossed the threshold.

Dr. Schmidt and Dr. Steve came in, pulling a monitor on a cart behind them. She pulled up a stool and sat down at my level. She glanced at Cameron, who had gone back to sleep on my lap. “We got the CT results back.” She hesitated. “They are not normal.” She rotated the apparatus so that we could see the screen.

It took a second for my eyes to see it. Another for it to register. After that moment, my life — and the lives of the people I loved the most — would never be the same again. 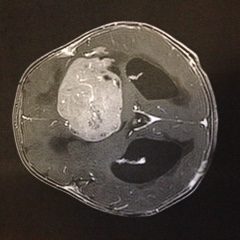 My chest had collapsed on itself. I heard a subtle humming in my ears. I looked at Kris. His eyes were wide and glued to the monitor. His tears began to spill over.

My mind struggled to grasp onto something I knew — from veterinary school or from experience, even from some movie I’d watched. Something I could use. A life raft. I cleared my throat. “Is it operable?”

“We don’t have that information. I’ve already called neurology and they are going to come talk to you soon.” Dr. Schmidt handed me some tissue. I must have been crying, too. I gave one to Kris.

I don’t remember the doctors leaving the exam room. I remember kissing Cam on the top of his head as he slept in my lap. I may have whispered “Oh my God” a few more times. Kris and I cried silently — together but apart. Stunned.

Yet another nurse came in and escorted us to yet another room to wait, this one with a sliding glass door on each side, an anesthesia machine in the corner and a stretcher in the middle. Before she left, she had a gift for Cam. I will always remember Dylan, a brown stuffed bear, and Cam’s chubby fingers pulling him from the nurse’s outstretched hand. Dylan would be the first of dozens of get-well stuffed animals Cam would receive.

Cam would be sedated and have an MRI that afternoon, then be admitted into the hospital for IV steroids to relieve the swelling on his brain. He would have his first brain surgery two days later, to get a biopsy of the tumor, so that we would know how to treat it. And that information would set Cam and the people who loved him on the path that brought us to today.

Here we are. Five years and countless moments — good and bad — later. 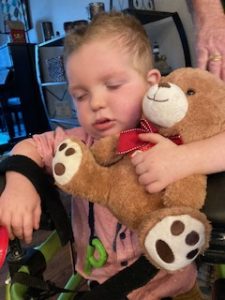 Of all the others, it was that first moment, when a doctor showed an image of the deadly tumor in Cam’s brain, that meant the most.

January 30 could have been a bad day (it does dredge up some unpleasant memories), but we choose a different option. In our house, January 30 is a holiday. We call it Brain Day. And its a time to celebrate the moments we’ve lived through, and the moments to come, to be thankful for our lives and Cam’s and whatever brain matter we may still have. We’ve designated it a time for hope and gratitude and Brady’s special hemispherectomy cupcakes. This year — the fifth anniversary — we celebrate during a pandemic, with only a couple of (very special) guests, and it is bittersweet.

Cameron is still here with us. He’s alive. He smiles and plays and harasses the dogs. He’s not without his scars and his challenges, but he’s got a life ahead of him, and for that we are thankful. 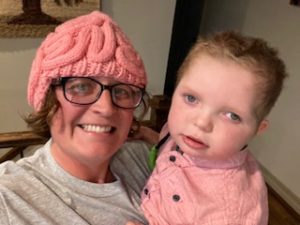