Cancer: The Gift That Keeps on Giving 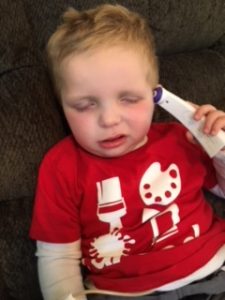 I haven’t posted in over six months. Not because I haven’t been writing and working, but because life got in the way. Again. Sure we had some normal stuff happen, like moving to a new house in a different town and losing my grandfather, but the main reason is because Cameron’s dang body just won’t get over itself.

As you may or may not know, over the last couple of years, I have made friends with a few parents whose children had cancer and recovered. A common bitch among our crowd is the word “remission” or “cured” and how it suggests to others not in our terrible club that the danger has passed. That once the cancer is gone, the fight is over. The truth is, cancer is the gift that keeps on giving.

My baby Cam has a brain tumor. It was aggressive. It used to threaten his life. And it always got the attention. Cancer with a capital C. Sexy and dramatic. Nothing sadder than a beautiful, pale toddler with a scar on his scalp and a radiation burn.

But the tumor isn’t his problem. Not anymore. It has been reduced to a tiny speck of evil, just sleeping in his brain, waiting to rise again. No, Cam’s fighting other battles right now. Tiny, boring ones that sneak in and wear away at his defenses. They chip away at his health while everybody’s looking the other way, worried about the Big C. Okay, that was dramatic. But the poor kid has had enough. Seriously!

And we were happy, because after that last surgery (the hemispherectomy) the seizures stopped AND we were able to get more of the indestructible tumor out. We were all looking forward to a peaceful time of recovery. Some smooth sailing, if you will.

But wait. Not so fast. 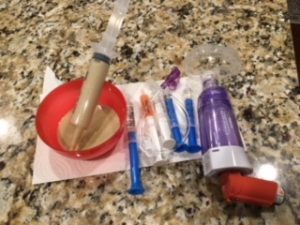 It wasn’t long before Cam had some weirder, more invisible signs pop up. His temperature was always too high or too low, but never normal. He stopped drinking water, or fluids at all. At the same time, he started peeing all the time, nearly clear, filling his diapers within minutes of each other. It was a bad combination. Less than a week after surgery, he was so dehydrated that we were back in the PICU. To fix that problem, they installed a lovely little device called a gastrostomy tube, so that we could FORCE him to get water, and we started giving him on a pill to tell his kidneys to quit dumping so much water. Meanwhile, he continued his nearly daily physical, occupational and speech therapies to regain his abilities.

We trucked along nicely for awhile, until last January. Then the coughing started. Really, it was more like a dry hack, a strong wheeze and a river of snot. Cam started coughing through the night so that he was exhausted at school, sleeping when he should be learning how to walk and talk. Sleep deprived and once again feeling desperate, Kris and I resumed the fight. Numerous trips to the doctor, multiple rounds of antibiotics, antivirals, nasal swabs, chest and abdominal x rays, blood work, ER trips, and after four months, Cam was finally diagnosed with asthma.

What? How the heck did Cam get asthma, of all things?

The doctors now think Cam may be aspirating, inhaling something- his food, his saliva, his own mucus- so that his lungs are chronically irritated. The current thinking is his airway is not protected because of his weakened swallowing muscles. Because of the stroke. That happened because of the tumor. 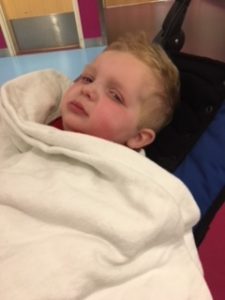 The freaking cancer strikes again. From a distance.

Like six degrees of Kevin Bacon, that’s how you get from brain tumor to asthma.

Right now Cam’s on two inhalers, with H2 blocker added to his anti-seizure and endocrine medications, and he sleeps sitting up. Next week, he goes in for a fluoroscopy, where they’ll try to determine just how bad the aspiration is. It’s possible that Cam won’t be able to eat anymore. He may have to be tube-fed only until he can gain enough strength to protect his airway. No more french fries?! The thought makes me want to cry. But so does the thought of losing him to something stupid like pneumonia, after he’s come so far.

Cameron’s cancer is still there, constant and malevolent, so scary we hardly ever mention it, but it’s no longer the threat of the day. It’s the daily struggles to keep him relatively healthy, eating and breathing, scooting around and laughing at Carson’s fart noises, that keep us busy.

Just like all my friends with special needs or medically complex kids, we do what we have to. Day after day, we fight for our kids, whether its seizures or vomiting, learning to tell the color blue from the color yellow or saying the word “please”. As the wise people say, every day is a new adventure.

So that’s why I haven’t posted. It’s no excuse, not getting my work done just because Cam is sick. He’ll always be sick, to some degree, and probably not in any way we can predict.

Sometimes I get so tired of worrying, of getting up with him in the night, of missing work and taking him to the doctor and picking up prescriptions. But it doesn’t matter, because giving up is not an option. We’re in it to win the whole war, not just a battle.

All I have to do is look at his sweet, chubby face and remember that we’re lucky we’re still in the fight at all. 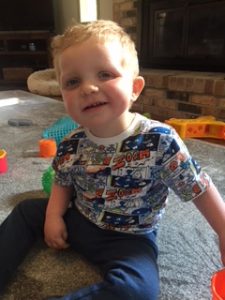 15 thoughts on “Cancer: The Gift That Keeps on Giving”