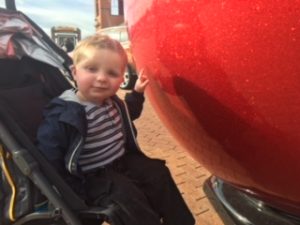 Last week Cameron had a neurological and motor assessment, one year after the end of the radiation to his brain, and six months after his hemispherectomy. For those of you unfamiliar with the neurocognition test, it involves asking the subject to do things like place blocks in a cup, point to the picture of the bike and match the colors, all while resisting the urge to rip the glasses off the therapist’s face. It is designed to determine the patient’s cognitive and motor abilities.

It is also a subtle and particularly cruel exercise in mother torture.

Seriously, I’m not dumb and I’ve been through this before. I know going into these things that Cameron is way behind other kids his age. He LITERALLY has half a brain, for crap’s sake! But still, to hear the results…always disheartening. This time, his raw score was higher (yay!) but his percentile was lower (boo!). Damn the brilliant thirty-month-olds he’s being compared to! Amazingly, some of his social and emotional scores were within average. That’s my sweet boy.

But still, as I pushed Cam back to the van after his test (he was fast asleep, I was choking back tears), I told myself the same thing I say every time…

At least he’s happy and not in pain.

It’s my mantra and it always helps, especially in conjunction with a cold beer. 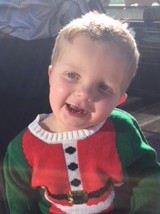 Two days later, we took Cam and his big brother and sister to a local production of Elf, the musical, directed by a good friend of mine and produced by my aunt. Elf is a great story anyway, but this show was cast with a number of individuals with special needs. Buddy himself was played by a very talented young man with Down syndrome. The show was amazing- funny and heartfelt, beautifully sang and acted, and absolutely not one speck less entertaining than a show by “typical” actors. I loved every second, so did my big kids and SO DID CAM!

Cam’s a special little guy of not even three years old, but he sat there, enthralled, grinning and dancing in his grandma’s lap. I absolutely loved the play, but I have to admit, I spent half the time watching Cam enjoy himself.Cam has five strikes against him (count em…brain tumor, stroke, radiation, epilepsy, hemispherectomy…in that chronological order, folks!) and we have no idea how he will turn out. Will he ever learn to talk and walk? Know his colors? Learn to read? Drive a car? Have a girlfriend (or boyfriend)? Or will the strikes against him slowly erode all the progress he’s made?

Either way it swings, I’ll be thankful he’s still here with us. But after the performance of Elf, I feel like maybe Cam really IS guaranteed a place in this world. Even with disabilities, those actors were beyond special in my eyes, as talented, confident and happy as any person- typical or not- deserves to be.

Cam will never be normal, typical or average.

8 thoughts on “Buddy the Elf, What’s Your Favorite Color?”