We Wait and We Play

Today is the day Cameron was supposed to have his next brain surgery. Instead, I get to be home with him, to laugh and worry and stare at the snow coming down in May. 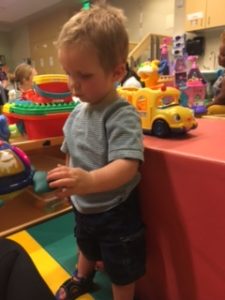 Cam has a specific, rare type of epilepsy characterized by subtle seizures that, if left untreated, will likely cause his development to slow or even stop entirely. Cancer caused this. His brain tumor- or the stroke he had during brain tumor surgery- caused this.

The original surgical plan was a hemispherectomy, to remove and/or disconnect the entire left half of his brain, the part causing the seizures. This aspect of the surgical plan is not really in question, though the thought of it keeps Kris and I up at night.

The reason the surgery was postponed is because because his surgeons are now planning to try and resect more of the tumor while they are in there mucking around. It sounds like a great idea, except that we know the tumor was irradiated last year, and so in theory should be dead AND we know there are a lot of important blood vessels right there and if Cam has another stroke, the show may be over.

So we must wait. I find myself wanting time to pass faster but at the same time hoping it never does. Cam is doing so good, he’s laughing and scooting around getting into cupboards. He points at everything, babbles and asks to read his favorite book, I Love You, Stinky Face. The thought of handing him over to have his brain cut into again is nearly unbearable. The reasoning, of course, is that the surgery will stop the seizures and therefore increase his development and quality of life. But what if it doesn’t work? What if he loses function and doesn’t get it back? What if there’s another stroke, this time to the only part of his brain he has left? What if he doesn’t wake up at all?

I can’t help but feeling like this surgery is elective. My brain knows its not, but he’s a happy, beautiful, vibrant two year old and this surgery could potentially take that away from us. Feeling insecure, today I email Cam’s neurosurgeon here in Aurora and his radiation oncologist in Boston to ask them once more how smart it is to risk damaging the blood vessels in order to get the tumor out.

Apparently, the long term chance of Cam’s tumor starting to grow again is about 50%. Ouch. I have to confess, I didn’t remember (or had blocked out) that horrible little statistic. Cam still has a lifetime of fighting ahead of him. I just conveniently forgot that fact, focusing instead on my sweet, happy boy in front of me.

There’s a fine line between hope and foolishness.

What a sad sack I am, crying in my cheerios. Must be the barometric pressure.

We decide we are going ahead with the surgery, both the removal of the left half of our baby’s brain AND the attempted removal of what’s left of his tumor. If all goes well, he’ll be walking and talking by the end of the year. And if it doesn’t go well…well, at least we know we tried and it wasn’t for nothing.

So now, we have three weeks to wait until he goes in for surgery. Three more weeks to roll the ball to him, feed him cheese quesadillas and sing him stupid songs.

And then…everything will be okay.