Cancer is the gift that keeps on giving. Since my son was first diagnosed with a brain tumor fifteen months ago, it has caused all kind of problems now leading up to a whole new adventure for my little guy…epilepsy. 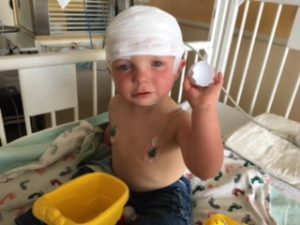 Last week we checked into the hospital for an extended electroencephalogram (EEG) with video and he earned his official invitation to join the ranks of those afflicted with a pediatric seizure disorder. Technically, he joined the club about six months ago, but we had spent so much time investigating, then alternating treatment with ignoring it, that it was only a few days ago that we were handed the official welcome kit- a flyer for epilepsy camp and a prescription for keppra.

The word epilepsy brings to mind violent, dramatic seizures, with collapsing legs, grimacing faces and paddling arms. Sweet, beautiful children who’s bodies are hijacked by the electric system in their young brains. Uncontrollable and heartbreaking, epilepsy can be a freaking nightmare.

Cam’s seizures were never quite like that. Last summer they were hard to ignore as he pitched himself forward, banging his head onto tables and my forehead alike, but lately they have been more subtle. A gentle head bob and a twitch of his eyes, just a few times a day, usually at nap time. They are easy to discount, and they came back at a beautiful time in his recovery when we knew his tumor had stopped growing and all we wanted was normalcy.

Not to be a drama queen, but we should have known better. From day one, Cam had never done what was expected of him. I very nearly cancelled the appointment with the pediatric epileptologist (because, you know, healthy normal kids don’t need to see refractory seizure specialists) and that very nearly became the stupidest thing I’ve ever done.

Cameron has a specific type of seizure disorder called infantile spasms, resulting from his tumor, the stroke or a 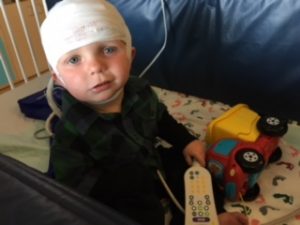 combination of the two. To our eyes, Cam’s seizures are insignificant and minor, barely even distracting him from whatever toy he’s throwing or cracker he’s eating, but the EEG suggests a much more sinister future is possible if they continue; severe mental retardation, worsening epilepsy, developmental delays or even death.

With so much at stake, the doctors recommend a surgery straight out of science fiction, a hemispherectomy. They want to remove and/or disconnect the rest of the left side of his brain so it can’t harass and corrupt the sweet little right side any longer.

“Okay, sure, sounds good. Another brain surgery would be great,” my husband and I said.

Not really. To say we were shocked, petrified and instantly depressed would have been an understatement but over the last few days, we have started reaching out to others who have been through this and their stories are overwhelmingly positive.

In any case, Cam’s been through worse. He’s a fighter and he’ll come out of that recovery room swinging.

And in the meantime, his big brother and sister have another camp they can go to.

1 thought on “Epilepsy Sucks Too”