Hi. My Kid Has Cancer.

My kid has cancer.

It’s kinda messed me up.

I still feel like a normal person most of the time. I do normal things- drink coffee at work, drive my other son to soccer in a mini van, help my daughter with her homework, argue about money with my husband, buy frozen pizzas for dinner- but cancer has changed me, deep down where strangers can’t see it.

Before my son’s diagnosis, if a St. Jude commercial came on, I’d think to myself, “that’s so sad…poor thing,” and switch the channel. Pediatric cancer was a nightmare of a concept, something that I knew was real but at the same time incomprehensible. It may be a cliche, but cancer was something that happened to someone else.

Since then I’ve learned that pediatric cancer strikes more often than I thought; it’s the second leading cause of death in children, after accidents. Depending on what source you read, in 2016 the United States alone, about 16,000 children under the age of nineteen were diagnosed with cancer and nearly 2,000 in the same age group died. Every child who is lost to cancer is a loss of a lifetime of love and memories, achievements and potential, not to mention a tragedy for that family from which they will likely never recover. 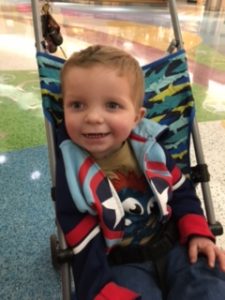 My son is one of the lucky ones. We fought hard for nine months, but his tumor has actually stopped growing, a fact for which I am grateful every day. But memories and fear haunt me. I know what it’s like to spend multiple nights in the pediatric intensive care unit, waiting for him to be stable enough to be extubated after brain surgery, to hold him while he has a seizure, to be told he had a stroke and he’d likely be living with severe disabilities, to secretly start planning what songs I’d like to play at his funeral.

But I also know what it’s like to watch his eyes light up and hear him yell “Mamama!” when I come home from work. To have him sleep in my arms, watch him scoot across the floor to eat dog food, laugh and throw toys at his siblings. Every second of every day, I am thankful for my time with him, however long it may be. There are no guarantees that he will have a long or normal life, that the long term effects of his treatments won’t slowly take him from us again, but that just means we appreciate what we have right now even more.

We all have our own problems, our own baggage. Mine happens to be my baby was diagnosed with a brain tumor when he was ten months old.

I’ve decided to write a blog about it. Why? Well, I’m glad you asked.

1- As I’ve already mentioned, I’m kinda messed up and writing helps me.

2- There are other cancer moms and dads (and grandparents, siblings, aunts, uncles, friends…you get the idea) that are going through their own personal hell and I’d like to find them so we can support each other.

3- I want to give back. My son is only alive because people we knew gave their time, their money and their hearts to our family and because millions of dollars were raised for cancer research before he was even born. I know there are others out there who need that too. 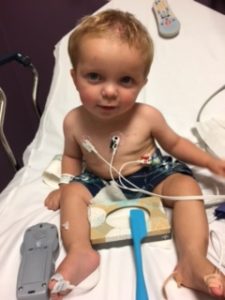 If I could take away my son’s cancer diagnosis, I would. But that’s not an option. Instead, I’ll be here, hopeful and thankful, scared and guarded, writing and hugging my kids, and trying my best to carry my baggage around without dropping it on my toe.